Google was right to get tough on payday loan ads

But tech companies can’t fix predatory lending by themselves.

Google announced Wednesday that it will soon ban ads for payday loans. For more on this shift, see one of these many excellent news stories.

My colleagues and I at Upturn are part of a diverse coalition of advocates that worked with Google on this new policy. Upturn published a report last fall, Led Astray, that explained the inner workings of payday loan marketing, and helped spark the conversation that led to this week’s change.

As you might expect, I think Google made a great call. Here’s why:

Problem 1: Payday loans hurt far more than they help, and disproportionately affect minorities and the poor.

A longstanding body of research shows that payday loans — small-dollar, short-term credit products with high interest rates — are harmful to most borrowers’ financial health. These loans are seldom short-term fixes, and leave most borrowers trapped in cycles of debt for months at a time.

Things are even uglier online. 90 percent of Better Business Bureau complaints about payday lenders relate to online lenders. Online payday loans come with even higher fees and result in even longer indebtedness. (I’ve seen annual interest rates well in excess of 1,000% online.) Online borrowers are more likely to receive abusive phone calls. And half rack up overdraft penalties from their banks, averaging $185 per person, says the CFPB.

Problem 2: Even applying for an online payday loan is risky. Payday marketers target the vulnerable, and are reckless with people’s financial data.

Most online payday lenders rely on “lead generators” — marketing companies that collect consumers’ data and then auction it off — to find borrowers.

Our report showed that payday marketers hone in on web searches that reveal financial vulnerability. Queries like “i need money to pay rent” and “need money fast” triggered ads leading to the worst breed of payday loan. These ads were targeted at people across the nation, even those residing in states where payday lending is illegal. 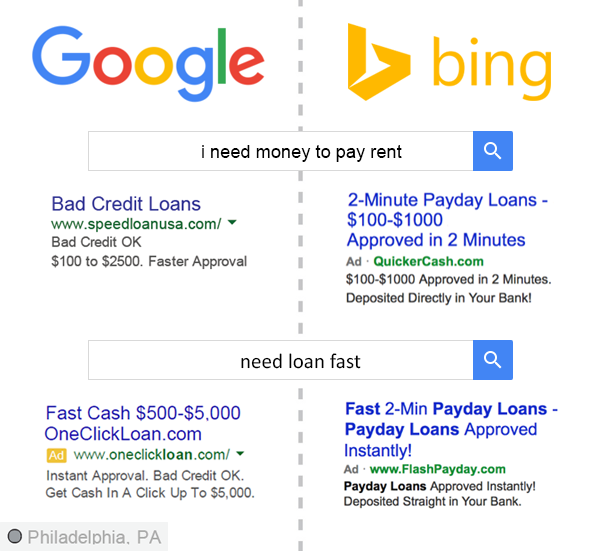 A figure from our report, Led Astray.

The websites behind these ads would collect people’s sensitive personal and financial details, and sell them to lenders. But that obviously wasn’t the end of the story. These websites reserved the right to do almost whatever they wanted with people’s data. (Seriously: You’ll see stronger privacy assurances from Spotify.) Not surprisingly, federal regulators have sued payday marketers like these again and again and again and again for financial fraud.

The payday loan industry has a tendency to ignore the rules. For example: Most online lenders fail to obtain a required license in one or more of the states in which they make loans. Lead generators routinely seek borrowers in states where payday lending is illegal (at least until they get sued), employing tenuous legal arguments to avoid compliance with state law. Also, the payday industry’s voluntary “best practices” are incredibly weak, allowing dangerous and widespread resale of people’s data.

For these reasons, among others, Google was right to choose to stop doing business with the payday loan industry.

Payday lenders will argue that Google’s policy amounts to unfair censorship. But Google isn’t altering its search results. It is free to choose its business partners, especially when the well-being of its users is at stake. Google has long banned ads for other dangerous products that are legal in some markets, including guns, tobacco, explosives, and recreational drugs. Google is also in step with the wider financial industry: Mainstream lenders have long eschewed payday loans.

Together, Google and Facebook (which banned payday ads last summer) are setting a powerful new precedent for Internet marketing. I hope other companies will follow suit.

Even so, technology companies can’t, and shouldn’t, solve this problem alone. Most payday loans still come from brick-and-mortar stores. Radio and TV ads are still legion. Ultimately, we deserve appropriate nationwide protection, and this is a job for our lawmakers and government agencies. (Keep an eye on the CFPB in the weeks ahead.)

In the meantime, Google searches just got a lot safer. That’s a good thing.

We explain how online lead generation works, describe the risks and legal complexities specific to lead generation for online payday loans, document the widespread use of search ads by payday lead generators, and recommend interventions.

Credit and Finance
Knowing the Score

Credit and Finance
Comments to the CFPB on Alternative Credit Data

We explore the risks and benefits of new types of credit data for historically disadvantaged groups.